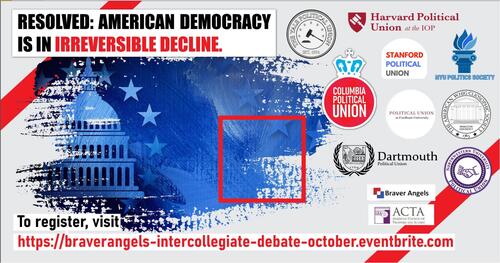 By Quinten Rimolde, Secretary of the YPU

On Tuesday, October 13, the Yale Political Union, along with the Political Unions of Harvard, Princeton, Columbia, Fordham, Stanford, Dartmouth, Northwestern, NYU, and many other universities under the purview of Braver Angels, gathered to debate “Resolved: American Democracy is in Irreversible Decline”. The virtual environment has brought about its own struggles, but within these challenging circumstances the expansion of intercollegiate debate has greatly enriched our political discourse and academic growth. The night was filled with many speakers of differing backgrounds and ideas, all engaging in a lively discussion about the current state of our democracy, ulitmately concluding in a passing of the motion by a vote of 21-19-3.

While maintaining a civil and orderly atmosphere, student speakers from across the nation clashed intellectually on a wide array of policy and procedural discourse. Some students alluded to the notion that the loss of confidence in free and fair elections, which undergird liberal democracy, necessitates reform, with some going so far as to advocate for revolutionary changes of our current system of government. Others were hesitant to embrace controversial, albeit progressive, radicalization, instead advocating for course corrections rooted in the time-tested framework of checks and balances. Both sides were seemingly willing to concede increased potential for zero-sum gamesmanship in our current political systems.

The night’s discussions weren’t limited to disagreements with sitting members or majorities, however. Taking a more philosophical viewpoint, speakers argued that the flaws in American governance are essential, as our ills are not always remedied by the “best” system. One speaker even stated that the perfect system is not the best system, but rather one that is not rigid and able to adapt to fit the evolving American experiment. Each of these statements elicited much approval and, often, equal dissent. Our current situation, despite its hiccups, allowed for the great experience of increased intercollegiate discourse that was well presented at Tuesday’s debate.

This was the second intercollegiate debate of the fall. The first was on September 8th, during which we discussed the topic, “Resolved: Sign the Harper’s Letter” with former Dean of Yale Law, Robert Post, and Professor of Government at Dartmouth, Lucas Swaine. The YPU will join its peer institutions for a third debate of this nature in November.

With any questions or comments, feel free to reach out to the President of the YPU, Jeff Cieslikowski.