Founded in 1934, the Yale Political Union is the oldest and largest collegiate debate society in America. It is the largest student group on Yale’s campus.

Each week, we invite renowned guests to engage and challenge our members, whether it's over tea, at dinner, or a in formal debate. The Union is a non-partisan debate forum dedicated to showcasing voices from across the political spectrum, emphasizing diversity of ideology and background. We've had countless figureheads and thought leaders join us for debate, including Ronald Reagan, Joe Biden, Lady Bird Johnson, Milton Friedman, Jimmy Carter, George Stephanopoulos, Margaret Mead, Noam Chomsky, George McGovern, Rev. Jesse Jackson, and Walter Cronkite, among others.

For over eighty years, the Union’s purpose has been the encouragement of spirited and substantive debate on matters of public interest. Modeled after the Oxford and Cambridge Unions, we operate like any legislative body, using parliamentary procedure to express passionate disagreement with civility. 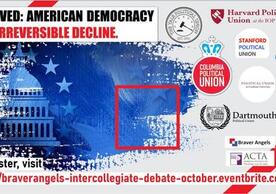 October 15, 2020
By Quinten Rimolde, Secretary of the YPU On Tuesday, October 13, the Yale Political Union, along with the Political Unions of Harvard, Princeton, Columbia, Fordham, Stanford...

YPU to Debate with Harvard, Princeton, and Others Tuesday, Sep. 8

September 5, 2020
On Tuesday, September 8th, the Yale Political Union will be partnering with Harvard, Princeton, Dartmouth, Fordham, Stanford, and a group schools affiliated with Braver...

July 3, 2020
On Tuesday, July 7th, at 7:30pm EST, the Yale Political Union will hold its first virtual debate and its first debate of the 2020-2021 school year. After nearly four months...
END_OF_DOCUMENT_TOKEN_TO_BE_REPLACED